“Your mind is like a parachute, it doesn’t work if it’s not open.” – Jordan Maxwell

That’s the trouble with the “system”, it teaches dependency, hierarchy, and false knowledge, where your choices are carefully narrowed down to “acceptable” alternatives within carefully confined parameters. The whole indoctrination process from birth creates nations of workers not critical thinkers, just the the way they intend it to be.

The Covid Vaccines were more than just a tool for depopulation, they were a significant step into the great reset (Transhumanism). Here we have the evidence that people who took the vaccine have been inserted with MAC addresses (Bluetooth connectivity). In this investigation we learn how this was achieved with big pharma and big tech working together to hoodwink the public.

Covid-19 Injections – A Gateway to Transhumanism By Dr. Carrie Madej

These poisons are affecting not only humans, but plant life, insects, birds, animals and fish.

This Video is an excellent brief summary of what is being covertly done to our planet and the effect on our health.

Hastings Point Australia And most people are oblivious to it….

Does the US Military “Own the Weather”? “Weaponizing the Weather” as an Instrument of Modern Warfare?
https://www.globalresearch.ca/does-the-us-military-own-the-weather-weaponizing-the-weather-as-an-instrument-of-modern-warfare/5608728

In this link you can find the list of weather modification patents from 1891 to 2003. It’s shocking to see what can be done.
https://climateviewer.com/2014/03/24/geoengineering-weather-modification-patents/

More Videos (Recommended if you want to know)
https://truelovefaith.com/how-poisoned-is-our-land-and-water-now-the-war-on-all-fronts/

With this data, as of today – it should be a criminal offence to administer a Covid vaccine to anyone under 45. And any CEO still mandating it to their employees should be jailed.

But as usual the media are covering this up, and not reporting the Senators speech. They have blood on their hands.

Today I joined with Senator Matthew Canavan, Senator Gerard Rennick and Senator Babet to lodge an order for production of documents in the Senate seeking production of the contracts between the pharmaceutical companies and the Australian government for the provision of the C@VID mRNA injections.

The Australian taxpayer deserves to know the details of these deals including the indemnities given to these companies in relation to the rollout.

You can read the full wording of the Notice of Motion on my website at the link below: 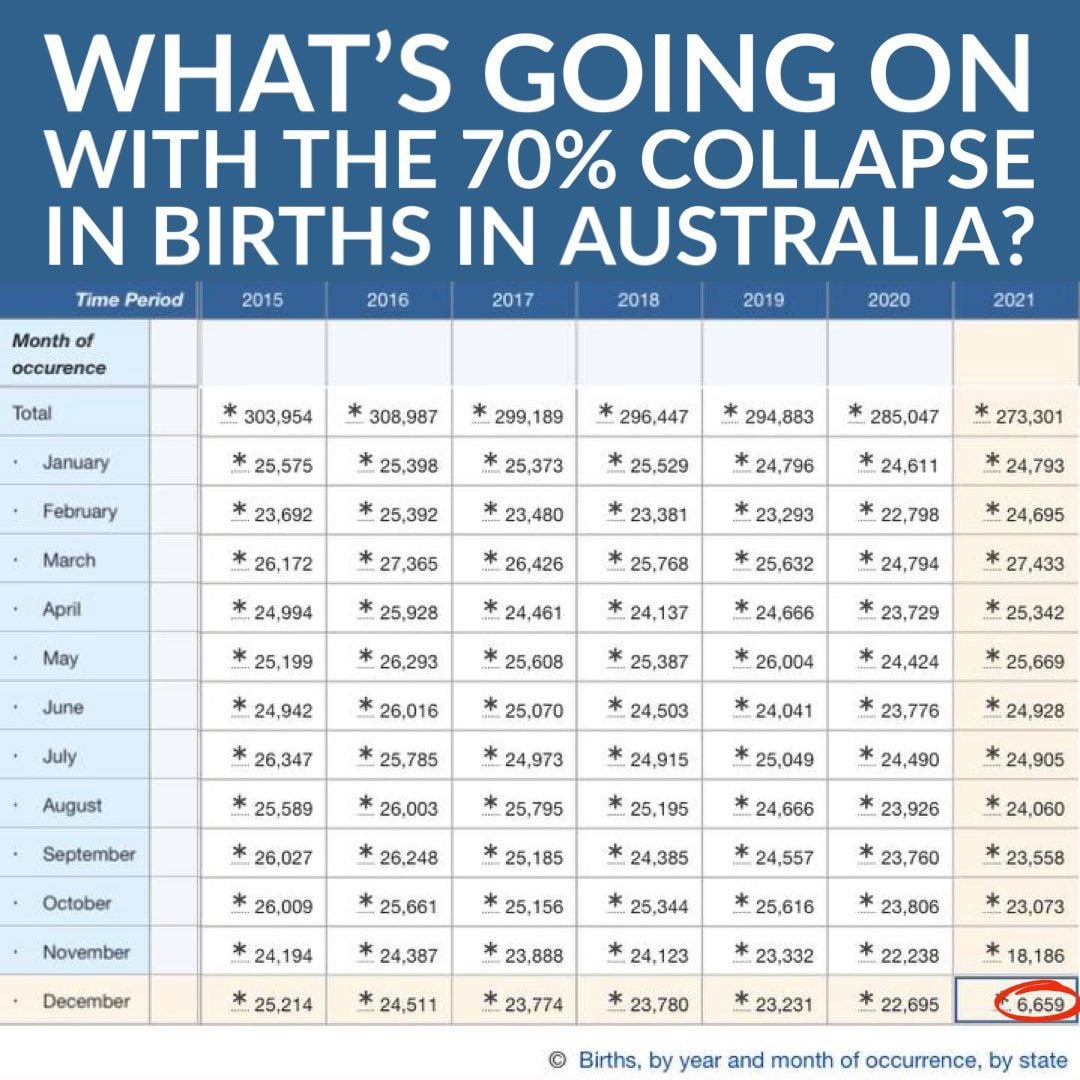 The miscarriage rate among Australian women who are fully vaccinated against the Wuhan coronavirus (COVID-19) is 75 percent, or five times greater than the 15 percent miscarriage rate for the rest of the population.

This is according to former Member of Parliament (MP) George Christensen, who discussed this grave matter in an interview.According to Christensen, who is quoting the Australian Bureau of Statistics, every month there are roughly 23,000 to 25,000 births. But this data only goes up to Oct. 2021. Since then, the number of children born each month has been dropping.

In Nov. 2021, Christensen noted that only around 18,000 children were born – or a 25 percent drop – and then in December of that year, the number of births dropped even further to less than 7,000. Similarly dour numbers can be found in the succeeding months, which could explain why the Australian government has been reluctant to release official statistics from last year.

Christensen even quoted a doctor he knows who works in a specialist fertility clinic in Brisbane and noted that the baseline miscarriage rate among women who have been trying to conceive for over 12 months is around 13 to 15 percent.

Seqwater Complicit and it is an [act of terrorism] against humanity….. No one gets a free pass. NCSWIC.

Fact sheet Fluoridation of water supplies – Seqwater
https://www.seqwater.com.au/media/789/download
Seqwater Fact sheet Fluoridation Preview
Is water fluoridation safe?
For more than 50 years, the addition of fluoride to drinking
water has proven to be a safe and effective way to reduce
tooth decay and improve oral health in communities throughout
Australia and around the world.
Fluoridation is supported by many peak health bodies
including the National Health and Medical Research Council,
the Australian Dental Association, the Australian Medical
Association and the World Health Organization.
The only health consideration with optimally fluoridated water
is dental fluorosis, which occurs in a small proportion of
children when they are exposed to too much fluoride in food,
water or toothpaste.
Dental fluorosis in children is typically mild and shows up as
white flecks in the teeth. Mild fluorosis does not weaken teeth
and is of only cosmetic concern.
https://www.seqwater.com.au/media/789/download

Where Fluoride Comes From

Fluoride occurs naturally in low levels in many kinds foods. A number of sea salts contain trace amounts of fluoride, for example. However, the fluoride that is added to the public water supply in the form of the chemicals – fluorosilicic acid, sodium silicofluoride, and sodium fluoride – is industrial waste products from the phosphate fertilizer industry. Of these chemicals, fluorosilicic acid (FSA) is the most widely used.
Read more

Head of the snake is the financial system

A Shot in the Dark Documentary (Bad Baby Vaccines)

How [Poisoned] is our land and water now?